All the rules I broke to meet Take That

In my opinion, what you can and should be reasonably willing to do to snag an autograph of your favourite celebrity includes:
1) doing high-speed car chases
2) climbing hotel walls
3) hiding in a bush
4) pretending that you are about to faint to the floor and then asking for a glass of water and then disappearing behind a wall
5) lying to security guys
6) seducing security guys
7) being security guys
As for me, I already ticked all the above boxes except for one (guess which one), and my point is: it’s OK to pay for a live show, for a CD, for official merchandising as well as for fake merchandising (both are likely to come from the same factory in China, in any case), but you should never pay to meet your heroes.
Those who pay for a meet and greet cheat life.

I had this in mind that afternoon in December 2006 as I was riding my moped through Via del Corso, in Rome – where – at a large music store – the band I had loved as a kid was holding a meet and greet for fans.
Take That had just got back together after exactly 10 years since they’d split in 1996, and they were now touring internationally to promote Beautiful World, their first album after the reunion.

It was one of these events where you buy the new album and you are given a limited-edition plastic wristband you’ll bring with you on the following day to be admitted to the meet and greet with the band.
With your wristband, you can see the boys for about 10 seconds and get your copy signed.
Without the wristband, you are out.

I hadn’t bought the new album and didn’t have any wristband on me.
I was also quite sceptical about the reunion.

The 90s were over. They weren’t kids anymore and we weren’t kids anymore either.
Neither Mark, Gary or Howard had succeeded as musicians on their own, while Robbie Williams had been biting the hand that was paying his bills, and though – like some sort of a merciless life metaphor – he was the only having a really successful solo career.
But he had also become a drug-addicted.
The rest of the band had spent the past 10 years struggling between either depression and alcoholism, or both. Robbie wasn’t in, and Jason was about to quit.
The dream was over, and the reunion didn’t make any sense to me.

But when that morning I woke up in my bed, I felt so powerfully strong that my place, my people and all of me belonged there.
I had no choice.
But without the plastic wristband, I had zero chance to make it.
I needed to come up with a plan, with no time for it. 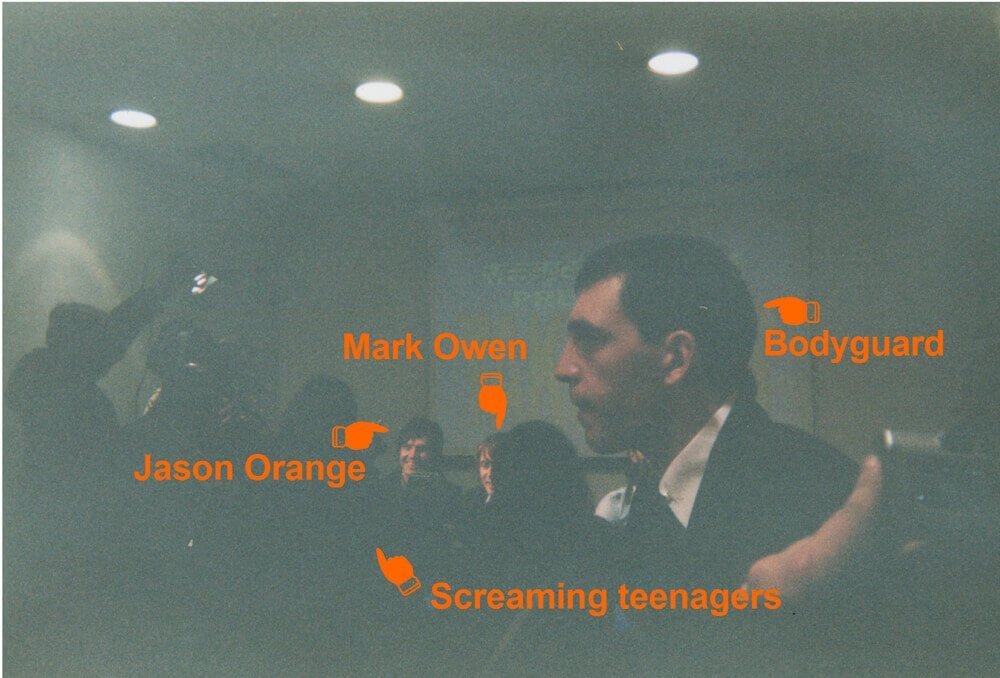 To my greatest shock, the moment I finally walked into the music store I unintentionally turned into somebody else.
With a bored, uncaring and snobbish attitude that literally came from nowhere, I went straight to the security guy.
Showing off an unlikely newly-invented Middle-Class accent, I  brandished my press card and – pretending that I didn’t give a shit about it all – I asked whether the press officer was already upstairs with the guys.
What press officer, for Christ’s sake? I didn’t know anybody there.
I barely spoke any English at the time.
I decided I was going to be a wealthy journalist doing some offbeat reporting about this mass hysteria.
And it wasn’t completely untrue: I certainly am a journalist.
As for the rest, I was unemployed, broke and afraid of being arrested, and my brain had just downgraded to the conditions of a teenage monkey.
Before the man could even reply, I quickly added if he didn’t think that it was all just ridiculous, did he? I mean, all this mess for what? For who? I mean, who did they think they were? The Beatles? The Rolling Stones?

Without even looking at my press card, which – as far as everybody’s concerned – might have perfectly been a gym subscription in reality, he let me in.
I couldn’t believe what I’d just done.
And I couldn’t believe that, three minutes later, I was kissing Mark Owen on the cheek while getting my CD cover signed by all the four Take That.

I was carrying around an old copy of Everything Changes, a Take That album that was released in 1993, and they looked at it suspiciously as if Robbie Williams might have jumped out of the cover to punch them in the face. 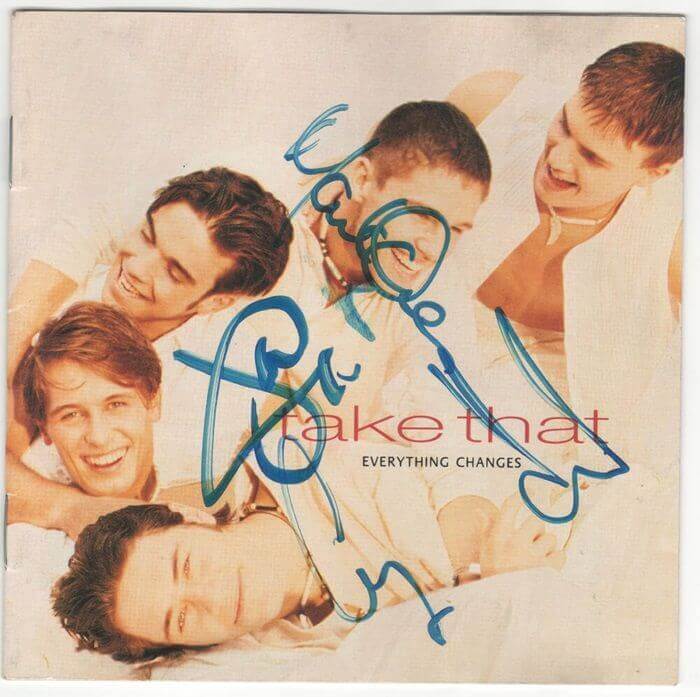 Everything changes but me.

Even though he must be at least 0.43 ft shorter than me, Mark Owen has always been my favourite, so when it came to his turn, I whispered the following into his ears: “❤❤❤❤Oh Marky, I loved you so much when I was young ❤❤❤❤”

He smiled and mumbled something in return, but I never quite understood if it was “Oh, I am alone now” or “Oh, I am old now”.

But before you could wake yourself up from the dream, the gorillas slap you awake.
And then they physically force you out without ceremony.
It’s there that you realise that the whole process had lasted just a few seconds, but that you are holding another place, a place just for yourself, where this moment will last forever.
In your heart.

★ If you liked this story, you’ll LOVE Dedicated to my fellow 1990s Take That screaming fans