The first time I bumped into something labelled by Armani I was about eleven or twelve.
At that age, any pre-teenager is quite a lot into collections. It was the late 1990s and, as far as I can remember, I was collecting a whole lot of – basically – rubbish including soft drink cans, random postcards, stones, small dolls, beach sand, stamps, movie posters, bottle caps, shells, sea glass, pictures of Take That, Kinder Surprise characters, Walt Disney’s Comics & Stories, Hello Kitty gadgets, hairpins and literally loads of telephone cards.
I’ve read somewhere that some (obscure) word to describe this hobby in the UK is fusilatelist, but I don’t have any first-hand experience of it as I didn’t speak a word of English at the time, and today no one seems to care less about phone cards.

It’s funny how young people enjoy accumulating all the crap they can, and it’s also funny how they just always wear a watch – even if their schedule is invariably decided by someone else, being it the school, the parents or the telly. In the 90s, mobile phones were still not as popular as they are today – at least not in Italy – and, at some point, local prepaid phone cards established themselves as genuine collection gadgets, as well as a good advertising opportunity for any type of business to advertise there. The most artistically beautiful phone cards began to be issued, and from a day to another, thousands of Italians of any age and wealth went into insane prepaid telephone card collecting.
Rare pieces could even get extremely expensive.

As kids, we used to spend our schooldays swapping phonecards, boasting about our newest findings, mapping the local telephone booths and heading collecting expeditions. At the time, you could also find two or three expired cards in each telephone booth at a time.
Today, Italy is getting rid of its public phones devices; official messages are left on the cubicles saying something like We are going to remove this phone booth, but if you don’t want it removed tell us why.

Italians don’t believe in the power of the newspaper complaint letter (nor in the newspaper itself), so call boxes are being removed all across the country, without anyone (not even a single newspaper – you see) giving a shit about it.

The bastards removed my favourite one in my neighbourhood in my hometown Rome, but they’ll never be able to clear away the millions of secrets I shared with that phone booth.
And I’m sure that – wherever she is now – she’s still keeping those secrets safe.
Phone booths may listen to everybody, but they won’t cheat on you.
Ever.
Keep it in mind the next time you get excited about your new stupid smartphone. 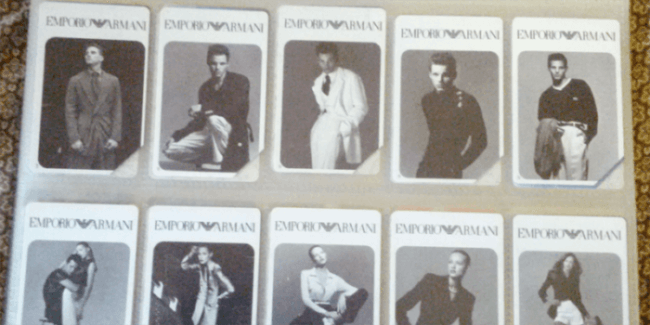 One day, a guy I was not interested in offered me one of these Emporio Armani phonecards in exchange for a date.
I was dying for that particular card but I said no, so he gave the card to old Sara C. who said yes.
She didn’t go out with him at the end, but she kept the card.
That killed me.

When I grew up and began travelling, high-end Italian fashion became a large part of my national pride, together with Nutella and Vespa.

In addition to Giorgio Armani, we’ve also got Dolce & Gabbana, Gucci, Prada, Versace, Valentino, Ferragamo, Trussardi and many many others, and they all are very important in the Italian fashion industry, but you tend to feel closer to the brands whose style inspires you the most.

Armani certainly doesn’t match my obsession for horizontal-striped clothing, but when it comes to no-frills, elegant, classy clean-cut and high-quality clothes, he is really second to none. Coco Chanel once said that fashion passes, only style remains the same – and this is basically what I’ve always tried to achieve for myself by mixing colourful horizontal-striped stuff with Armani type minimalist black, grey and white basic pieces.

A few weeks ago, unexpectedly and to my greatest surprise and pleasure, I had the chance and the honour to submit the following questions on fashion and career to Giorgio Armani in person.

Dear Mr Armani, what is your current vision of the modern lady at work?

How have you interpreted the results of such a transformation?


At the very early stages, my brand has helped women feel important and well-respected in the workplace, back in a bygone era when such respect didn’t come for granted as it does today.

How has the situation improved today?


Fortunately, today the situation is different. Women are giving themselves permission to express their own femininity at work.

So, how should women dress for the workplace?

The traits of women according to Armani have not essentially changed: women are still mindful and determined to succeed, and what they look for in their outfits and fashion is a viable way to complement their own femininity, not to disguise themselves as women.

★ Enjoyed this interview? We have also interviewed the most famous Italian in the world, Andrea Bocelli, and – on the other hand, you also may want to learn why Italians are everywhere! Giorgio Armani – © (for both pictures) belongs to Stina Dabrowski, from her official YouTube channel – Fair use