How to work for Santa Claus in Finland

In the summer of twelve years ago, right after graduating with a BA in Whatever, I found myself squeezing the following in a school backpack:

A thing I can perfectly remember from that trip is that we were still allowed to carry on board as much shampoo and toothpaste as we liked; we had no idea this was going to be our last liquid-friendly flight just before – that same month – the 2006 transatlantic terrorist aircraft plot to detonate liquid explosive disguised as soft drinks was discovered.

If you’re old enough to remember, doesn’t it feel weird not to have totally forgotten how it used to be?
I know the same applies to life before mobile phones and Facebook and wrinkles – but doesn’t it sound like all travellers were born carrying a single, transparent, resealable plastic bag, which holds no more than a litre and measures approximately 8 inches x 8 inches?

At the time I had just turned 22 and was finally flying to the country I had spent years dreaming about.

The place wasn’t the typical graduation trip destination you would expect, but Finland had always fascinated me for the following reasons:

– Their weird language:
(Lentokonesuihkuturbiinimoottoriapumekaanikkoaliupseerioppilas counts 61 letters and is said to be the longest word in Finnish.
– Their history and their strong spirit of independence.
– The crap they dare to eat.
– Late novelist Arto Paasilinna and his insane book  The year of the hare.
– The real Santa living in the Santa Claus Village on the Arctic Circle with all his reindeer, elves and cups of hot chocolate.

Much time later, I eventually put all the stuff I learned about Finland together in a novel that was released in 2014 in Italy and was even featured in the Finland Times. Even if this was going to be my third book getting published nationwide, I had a really hard time finding a decent publisher interested in stuff like the Finnish Wellington-boot and mobile-phone throwing contests.

I tried hard to make a good impression – I was absolutely confident that getting a job at -40°C that involved wearing a striped elf hat was going to be the solution.

The striped hat actually formed a big part of my motivation – as my only alternative at the time was getting a leading role in a cage, just as Pink Floyd said in Wish You Were Here.

But the real Santa discusses employment terms with his reindeer only, so I left the village empty-handed.

The idea of getting a job at the Santa Claus Village never really left me in over a decade and – as many as twelve years later – I eventually bumped into the man who, at the time of this interview in 2018 and before the distasteful Brexit became effective, was in charge of a recruitment programme to work at the Santa Claus Village in Rovaniemi, Lapland; consequently, it goes without saying that he is employed by a British company.
Then tell me who does rule the world. At the time we spoke, Chris Lovelock was working for a Surrey-based specialist tour operator in the UK and he is one of these guys who, when they decide to wear a Christmas jumper, end up looking a bit like Colin Firth in Bridget Jones’ Diary.
Only Brits can do that.
I tried to wear a Christmas jumper just once during my old job in my blue-carpeted office in front of my very British former colleagues who were all wearing their own jumpers, drinking tea and taking selfies.
I guess this was supposed to be a sort of team-building activity.
I don’t know.
All I know is that I was looking like a perfect moron.

Anyway, if you’re interested in working for Santa Claus in Finland, please bear in mind that I have absolutely no idea how it works today after Brexit created a massive crisis in the United Kingdom in exchange for a blue passport for all British citizens, so their frustration over the EU burgundy passport design can finally come to an end now.
Together with the whole UK economy. Chris, do you exclusively recruit staff for Santa Claus?

Apart from the Santa Claus Village positions, we also have many other roles you can find on Hotelplan, our website. We have a large base covering something like 1,000 jobs we recruit for in Austria, France, Switzerland, something in Andorra. And also in Italy.

(Italy?! Is he trying to return me back to the sender?) How many people want to work at the Santa’s village?

Well, it’s super busy, very popular. We’ve got loads and loads of people who want to come – which is fantastic – this means we do a good job!

What do you look for in temporary workers for the Santa Claus Village in Rovaniemi?


Obviously, we do have specific criteria – you need to come and work for us as a company – you must have a UK/EU passport, UK address, bank account and national insurance number. If you’ve got that, well, we’ve got multiple roles you can apply for. We are looking for people who have experience working with children, working with families for certain roles such as the Elf one. Then we’ve got sales roles: if you have a background in sales and customer service and you want to work as a shop assistant you need to be prepared to deal with high-pressure situations. Then we’ve got representative roles, we’ve got roles for chefs, for people who have at least some experience cooking for 8-10 people. Then, just like any other company, we’ve got management roles as well, so we look for people who have a background in tour operation management, staff management – you know, people working in our industry but with a management background. Also, if you are a non-skilled person but you have a really good attitude and let’s say you have a driver licence, we definitely have good opportunities for you, as we also hire people to work as drivers.

Do you also recruit real Santas? When I travelled there in 2006, the Santa I met was very much into the role. He looked just like the real Santa Claus.

Yes haha – we’ve got five Santas and we also use real Santas from Finland as well, and they work for us every December.

And what do you mean when in your job descriptions you write that workers must keep the Christmas spirit all the time?

Yeah, of course, we do expect people to love Christmas and to be very conscious about that – and if you don’t, this is probably not the right job for you. We do encourage people at the interview stage to show us that they’re passionate about Christmas and about Santa.

What kind of people do apply for these roles?

We have every variation of people, in every single way. We’ve got people from the age of 18, we encourage people of different ages and countries to come and work for us, so as long as you have a European Union passport and all the UK criteria I mentioned earlier, then you can come and work for us: we’ve had Spanish, Lithuanian and French people working at Santa’s, so we actually employ people from all the European countries. We’ve actually got a lot of opportunities, not only in Lapland but all across the Alps as well!

Do you also have people who, after working for one season or two, want to go permanent?

Yeah, of course! I actually started as a temporary worker in Lapland, working for 6 weeks – this is how I started in this company, and then from there, of course, I covered a lot of different roles and now I work full-time permanently in the office… so, yeah, there are definitely opportunities for people to start as temporary workers and then turning permanent.

How do you cope with the extreme weather in Lapland?

Haha, well – you do obviously need to know what to wear – we’ve got arctic thermal suits that are like all-in-one, we’ve got thermal boots as well, and we’ve got gloves and you know, really good-quality clothes as well – we rent all our equipment from local people in Finland. It does go really cold at times – but no matter how cold it is we’re still going to work. I think you need to have the right mentality and keep yourself busy, so it doesn’t really matter how cold it gets, you don’ think about it.

Have you ever seen the Northern Lights with the pink and green sky?

What time do you wake up in Lapland?

Other than the grey light you get from 10 am to 2 pm, during the winter it’s always dark. We start working at 7 am or 7.30 am in the morning and we can finish as late as at 10 pm – but if you do work that long you definitely have breaks during the day… of course, we don’t make people work 7-to-10 without breaks!

★ If you liked the style of this interview, you may also find this and that entertaining! 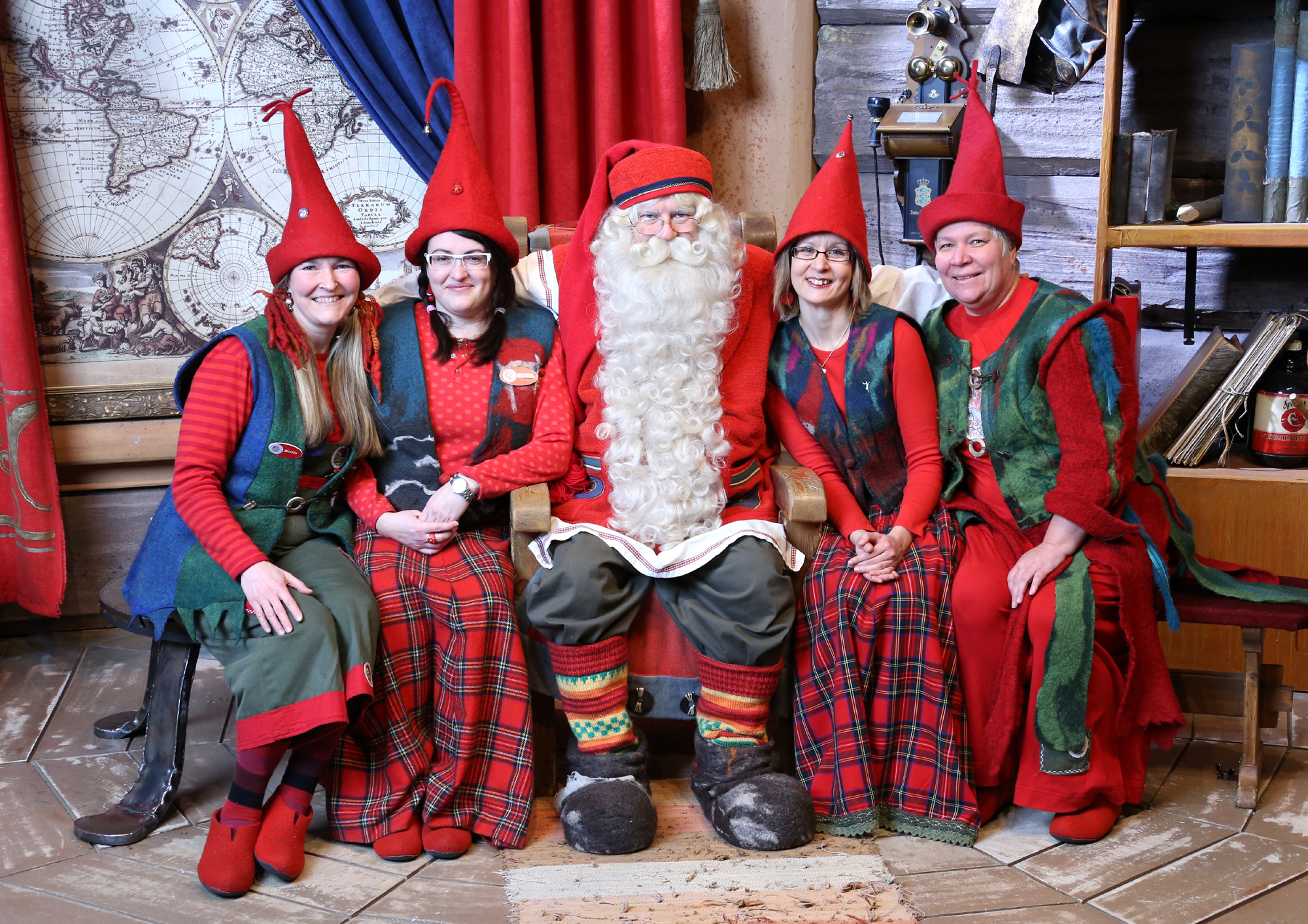