The Belgian who enchanted David Bowie: interview with Ozark Henry Multi-platinum Belgian musician Piet Goddaer, best known by his stage name Ozark Henry, is an extraordinarily imaginative and skilled composer and singer, and one of the leading pioneers of 3D  immersive sound.

The nine studio albums he released in his 25 years in music range from avant-garde to pop, from rock to symphonic melody; his very first record, titled I’m Seeking Something That Has Already Found Me, was praised by David Bowie as “debut of the year” in 1996.

The talented composer later said about Bowie: “He taught me that ego doesn’t matter. It is the work connecting us – the music we leave behind – that matters most. I never forgot this lesson“.

Recently appointed United Nations Goodwill Ambassador against human trafficking by the UN Office On Drugs And Crime, Ozark Henry continues to experiment with audio, visual, technology and a unique blend of music genres, producing groundbreaking 3D immersive sounds and collaborating with renowned artists such as the very opinionated Jah Wobble, Martin Glover and late Jackie Liebezeit, and orchestras like the National Orchestra of Belgium and the Metropole Orchestra. We Will Meet Again by Ozark Henry

The worldwide tour Ozark was preparing in 2o20 was cancelled, and his small coastal village in West Flanders, called Oostduinkerke, was put into quarantine; this prompted him to release We Will Meet Again and capture this weird moment like a motionless picture.

Piet is remarkably clever, unpretentious and committed to the progress of humanity, and made it clear that he didn’t produce the record just because he was bored by lockdown, which will drive you to appreciate his chords and lyrics to a whole new level.

Piet, what does We Will Meet Again mean to you?

I wrote it after being in lockdown for four weeks. I set up an online concert for everyone in my village to create a moment of togetherness, and when I was thinking about what I should play, this song popped into my head. For me, it means embracing reality, showing resilience, living for now but dreaming about the future.

Who are your sources of inspiration in music? 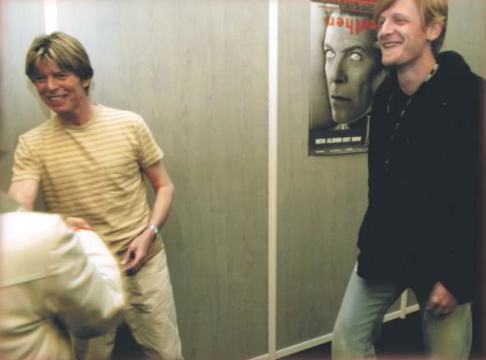 How did it feel when, back in 1996, David Bowie praised your first album as “the debut of the year”?

One hundred per cent surreal, especially when, later on, his assistant called me on my landline, to say that David Bowie was inviting me to hang out with him.

What does avant-garde music mean to you?

It means music that lies at the forefront of innovation, and today it is exploring the potential of immersive sound.

What was your dream job as a child? Did you have a plan B?

I wanted to be a sculptor, but not having the means nor the support, I started my career as an art painter and set designer. Music was part of my set designs and, in the end, became my main activity, as it still is. I don’t think I ever had a plan B. Let’s hope I’ll never need one!

Are there any artists you would particularly like to collaborate with, at this stage in your career?

If I don’t need to be humble, I’d love to work with Kate Bush. She’s one of the most complete artists of all time.

Your fourth album, The Sailor Not the Sea, out in 2004, featured Jah Wobble playing bass: what was it like to work with him? During our interview, he said that he cannot “just help that all of his friends are born in April”. You were also born in April.

That was such a great experience, and he also brought late Jaki Liebezeit with him. Jah and Jaki together were pure, just pure magic. John [Jah] on his ovation bass, the amp full-on, his fingers whispering to the strings on his guitar, Jaki with a tiny minimal drum set, no pedals, even playing his bass drum with his sticks. Both of them are artistically so generous. Jaki was very introverted and most of the time John was talking on behalf of them both, but with a very deep respect for his friend and fellow musician. At the end of that session, John went back home to England by train and Jaki stayed a bit longer to avoid traffic jams as he came from Germany by car. And then, all of a sudden, he started talking and talking and talking, and then he stayed for another day. These have been and still are by far the most amazing rhythm sections I’ve ever worked on. What do you think about talent shows like The X Factor?

I don’t watch much TV so I’m not familiar enough with it to have an opinion.

Your country, Belgium, is trilingual Dutch, French and German; which language are you most attached to, and why did you choose to sing in English?

I’m most attached to Flemish, my native language, which is a dialect of Dutch influenced by both French and English but with a pronunciation closer to English rather than French or Dutch. Since there are only a handful of people left who still speak Flemish, it seemed like I didn’t have the option to sing in Flemish.

What are your feelings towards the UK after Brexit?

I love the UK and its rich cultural identity but I don’t get Brexit, and the answer to what Brexit really is about is probably as obscene as the answer to the following question – and just to be clear, I’m referring to the US now: so, how can anyone who is guilty of bigotry, openly sexist, racist and extremely narcissistic be the best option to lead a nation and represent the people? It’s shameful and sad. It’s not about the people as it should be, and the 2020 crisis has painfully revealed that.

I’m proud of being able to take care of my family, both emotionally and financially. And I’m proud I’m making a difference in fighting human trafficking and inequality.

You were appointed Belgium’s goodwill ambassador against human trafficking by the United Nations Office on Drugs and Crime. Would you like to say something about this public engagement?

There are more people victims of modern-day slavery and human trafficking now than ever before in history: it is something we witness every day, and still, we let it be as if the victims were invisible. It’s a crime we should all be ashamed of. Fighting human trafficking is fighting inequality, and if we decide not to accept inequality anymore, people will understand immediately whether they are victims or not. Human trafficking affects every nation in the world, and most of the victims are women and children. The Blue Heart Campaign I’m supporting celebrated its 10ᵗʰ anniversary two years ago, but even after all this time, it’s still a struggle to get something urgent on the agenda and give it the attention and support that it is so desperately needed.

I was looking forward to celebrating 25 years in music in 2021, with a new album that will be out soon. I also look forward to finalising my new project called August Parker. Meanwhile, you can listen to We Will Meet Again on my channels.

★ Liked this article? Read also our interview with electronic music legend Moby about his long-term friendship with David Bowie and our interview with Steve Norman of Spandau Ballet who talked about The Thin White Duke extensively

★ If you enjoyed this Q&A, you may also like our interviews with legendary Genesis guitarist Steve Hackett, Prince’s musical director Morris Hayes, Suzi Quatro, Imelda May, Jah Wobble, Andrea Bocelli, Zucchero, Bruce Foxton and Russell Hastings from The Jam and Glen Matlock from The Sex Pistols

★ For more stories about music legends, also have a look at our interview with Danny Zelisko, the concert promoter who has worked with everybody, from Alice Cooper to Pink Floyd, from Queen to Guns ‘N Roses